You are here: Home / Practice Notes / A Logical Duet 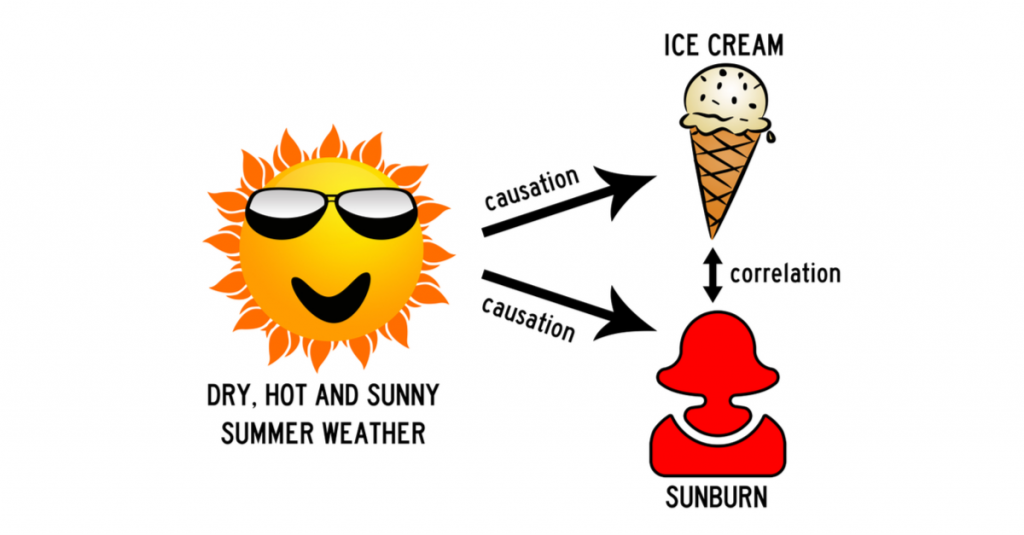 Every now and again, I find it useful to review logical principles that are central to rational discourse, yet often misunderstood or just botched in the heat of the moment. Here are two all-time favorites …

Just because two events are correlated doesn’t mean that there is a causal relationship that exists between the two.

For another example, consider the head and the tail of a cat. Cat-heads and cat-tails very frequently appear together—so it’s fair to say that their appearances are correlated with one another.

The correlation of cat-heads with cat-tails is due to their jointly belonging to the more general category of “cat.” In this sense, we could say that the appearance of a cat is the cause of the cat-head appearance as well as of the cat-tail appearance.

In other words, cat-heads and cat-tails share a common cause—or, more appropriately, a common source—namely, a cat, and this accounts for their correlation.

There is a more-or-less predictable mapping between, say, the subjective experience of seeing the color red, and particular neurological activity. Like the head and the tail of a cat, they tend to arise together.

An equally plausible explanation for this correlation is that subjective experience and neurological activity jointly belong to a more general category, which is the source of both of them. One candidate for such a category is Awareness.

If the subjective experience of seeing the color red, and some specific neurological patterns, emerge simultaneously from the ground of Awareness—this would account for the correlation between the two. At the very least, it’s an interesting hypothesis!

The take-home point is that a correlation between subjective experience and neurological functioning does not necessarily imply a causal relationship between the two.

Consider a golden ring: a ring made of pure gold. Since gold is the substance of the ring, it is a necessary condition for the appearance of the golden ring. Without the gold, there could be no golden ring.

But does this mean that gold is also a sufficient condition for a golden ring? No, it doesn’t!

Why? Because the mere presence of the gold doesn’t guarantee the appearance of a golden ring. If it did, I could just place a lump of gold on the table in front of me, and a golden ring would appear. But this isn’t how it is.

Other conditions, aside from the gold itself, are also necessary in order to create a golden ring. For instance: a skilled jeweler, and the jeweler’s tools, and a specific design for the ring. Only in the presence of these additional conditions does the golden ring manifest.

So, while it’s true that taking the gold away from the golden ring causes the golden ring to disappear (because gold is a necessary condition)—it’s not true that the golden ring depends for its existence exclusively on the gold. Its ingredients include not only gold (its fundamental substance) but also the jeweler, the tools, and the design.

An example germane to nondual spiritual inquiry is the relationship between Awareness and perceptions of phenomena (aka appearances).

Clearly, Awareness is a necessary component of the experience of perceiving phenomena—because without Awareness, there could be no perceiving.

But does this mean that Awareness is also a sufficient condition for perceiving phenomena?  No.

Also, the perception of a specific phenomenon requires conditions other than Awareness per se.

But does this mean that Awareness per se is a sufficient condition for the experience of seeing-an-elephant? No, it doesn’t.

So, how does this accord with an understanding of Awareness as the nondual source of all phenomena?

It puts us right in the heart of the mystery of a nondual Reality which can also appear as apparently differentiated perceptions. Seeing-an-elephant is not an identical experience to seeing-a-ladybug, even when we understand clearly that the essential substance of both is Awareness.

What accounts for the differences between these “mere appearances”—however “seeming” or “only apparent” they may be?

And what’s the appropriate relationship to such differences? Should they be basically ignored, in the manner of melting all our golden jewelry down into a single lump of undifferentiated gold? Or should we appreciate and actively celebrate the variously unique ornaments?