You are here: Home / Practice Notes / As If 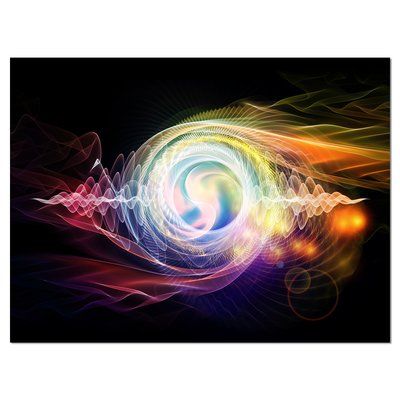 In a fascinating article—Does The Universe Exist If We’re Not Looking?—that’s based upon an interview with (the late) physicist John Wheeler, I learned something new about the delayed choice quantum eraser experiment, which is that it originally was a thought experiment involving a pair of distant galaxies and an even-more-distant quasar. It was only later that a table-top version of the delayed-choice scenario was conceived, designed and conducted in a lab at the University of Maryland.

What this truly mind-bending experiment shows is that conscious observation not only effects current behavior of, say, photons—but can also effect how these photons behaved in the past, i.e. before the observation/measurement was ever made. In the case of the cosmic-scale thought experiment, the implication is that the behavior of photons emitted from a quasar millions or billions of light-years away—i.e. way before there was human life on earth—can be effected by an observation made here and now. Whoa!

The conclusion that Wheeler and others draw from the delayed-choice experiment is that we live in a deeply interactive co-creative universe, where present observations are selecting among possible quantum outcomes, in more-or-less continuous fashion. And this then gives rise to the question that is the title of the essay—most famously associated with Irish philosopher and Bishop George Berkeley: Does the universe exist if we’re not looking? Berkeley formulated the question in terms of a tree falling in a forest: If there’s no one there to hear it, does it make a sound?

Berkeley’s question along with these recent discoveries in physics (quantum mechanics in particular) have given rise to a whole host of New-Age propositions around the theme of “creating our own reality.” And I must say that many of these ring true to me … to an extent. It feels that there’s at least a kernel of truth to them—yet oftentimes also a sense of something not quite right.

So I’m left wondering: In what ways do such “we create our own reality” hypotheses actually accord with the current state of knowledge in physics itself? Or are new-physics references best understood as evocative metaphors, and nothing beyond?

We’ll come back to this question, but for now let’s return to the words of another professional physicist: Stanford University’s Andrei Linde.

In the following passage, Linde—referencing the Schrödinger’s cat thought experiment—points out how the principles of quantum mechanics dictate severe limits on the certainty of our knowledge:

Will The Real Observer Please Stand Up

Returning now to the I create my own reality affirmation …. It would seem imperative, before agreeing or disagreeing with this statement, to be crystal-clear about our answer to another question:

When we say, I create my own reality, who or what is the “I” that is (purportedly) doing this? Is the “I” a human body? Is it a human mind? Is it a separate soul or personal consciousness? Or is it a transpersonal universal awareness?

Such an exploration is parallel, in certain ways, to the exploration a physicist might undertake to determine exactly what kind of observer is required to collapse the wave-function, in the Copenhagen interpretation of quantum mechanics. Can a mechanical measuring device, on its own, collapse the wave-function? Or does it require a human (or other sentient) being to read/interpret the measurement? Is the “conscious” aspect of a conscious observer something individual/personal or is it transpersonal?

Regardless of how professional physicists resolve such issues, anyone who is going to affirm that I create my own reality would be well-served to be clear about their own answer to the question: who or what is this “I” that’s creating or attempting to create “my reality”?

Such a question tends to be dismissed as being too obvious to even care about—yet if we actually go looking for this “I,” and attempt to define precisely its referent, interesting things happen.

But let’s return now to Bishop Berkeley’s provocative thought experiment—If a tree falls in a forest and there’s no one there to hear it, does it make a sound?

Reportedly, Albert Einstein challenged his friend and fellow physicist Niels Bohr—one of the founders of quantum mechanics—with a similar question: Does the moon really not exist if no one is looking at it? While Einstein found such a proposition ridiculous, Bohr’s reply—viz. that Einstein could never actually prove that the moon would exist in such a scenario—brought the friendly debate to a draw.

The following set of limericks—penned by English theologian, priest and crime writer (!) Monsignor Ronald Knox—offer another view and potential resolution of the issue.

God in the Quad

There was a young man who said: “God
Must find it exceedingly odd
To think that the tree
Should continue to be
When there’s no one about in the quad.”

Reply:
“Dear Sir: Your astonishment’s odd;
I am always about in the quad.
And that’s why the tree
Will continue to be
Since observed by, Yours faithfully, God.”

What’s being playfully/seriously suggested here is that God him- or herself is the conscious observer that guarantees the existence of phenomena. Or, expanding the argument to the realm of physics: God is, ultimately, the observer that collapses the wave-function, and hence selects an outcome among various possibilities.

If we replace the theological language of “God” with the nondual formulation of “pure Awareness,” then the suggestion becomes something like:

The irony is that when we discover and then rest in and as our true identity (i.e. pure awareness), the happiness and fulfillment that previously was assumed to be delivered by this or that object—are discovered already to be complete. So any contracted need to transform appearances for the (assumed) purpose of experiencing happiness dissolves completely.

Does this mean that we will cease completely any artful endeavor to transform appearances? Maybe, and maybe not. In moments, our contentment may be so deep that simply resting knowingly as Awareness is more than enough. As the body/mind/world continue to arise and transform in accordance with the laws of physics, we remain in the position of a witness; content to fulfill our role as an observer, and no more.

In another mood, there may be more active engagement, in the mode of lucid dreaming: God’s playful-creative intentions tossed like pebbles onto the surface of the phenomenal ocean, creating ripples …

So, do I create my own reality?

Because I’m already happy, already content. And such primordial fulfillment is precisely what allows creative activity to be an expression of happiness, rather than a misguided attempt to secure happiness via rearranging body-mind-world phenomena.

* Do I Choose My Thoughts?
* The Scientific Evidence for God (as Universal Consciousness) by Amit Goswami