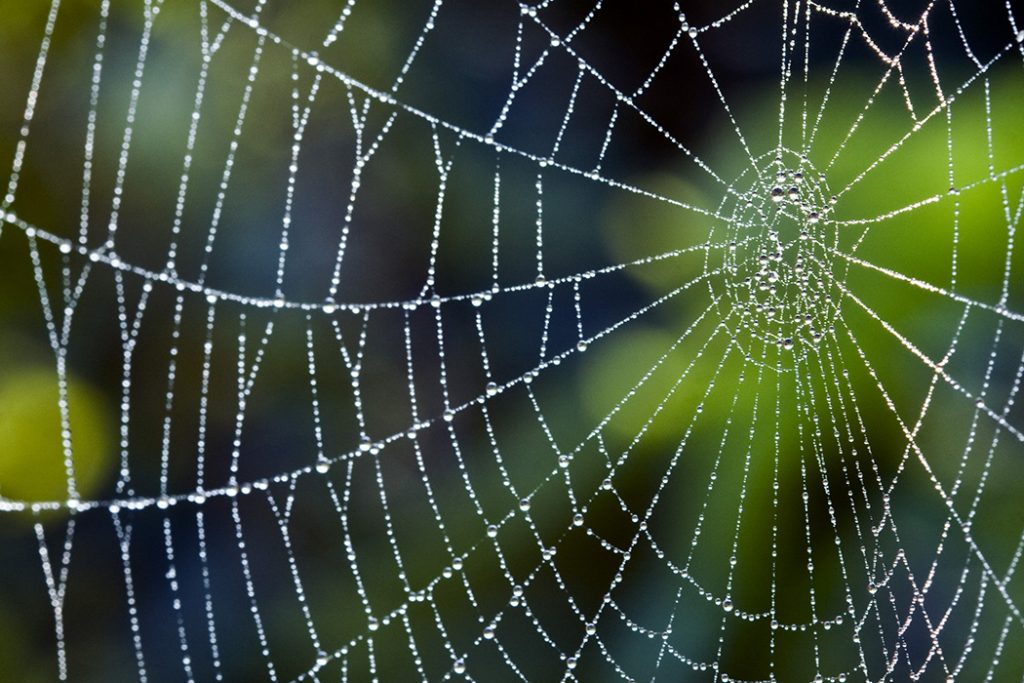 A noiseless patient spider,
I mark’d where on a little promontory it stood isolated,
Mark’d how to explore the vacant vast surrounding,
It launch’d forth filament, filament, filament, out of itself,
Ever unreeling them, ever tirelessly speeding them.

And you O my soul where you stand,
Surrounded, detached, in measureless oceans of space,
Ceaselessly musing, venturing, throwing, seeking the spheres to connect them,
Till the bridge you will need be form’d, till the ductile anchor hold,
Till the gossamer thread you fling catch somewhere, O my soul.

In an ancient Vedic metaphor, Brahma—the creator of all things—is described as a spider that (from the cavern of his/her abdomen) spins the silken web of the world.

Specifically, in the Mundaka Upanishad (1.1.7) we find this suggestion:

As a spider projects forth and draws back (its threads), as plants grow on earth, as hairs grow on the body, so does the universe emerge from the Imperishable Being.

Such imagery dovetails with the Indra’s net metaphor employed within Buddhist philosophy. Indra’s net is an interwoven matrix, where each jewel (i.e. node within the net) reflects all the other jewels—illustrating the principle of dependent origination and emptiness (of a separate-self).

While the jewels may appear to be separate, when we look more deeply we see that each contains all the others.

The key component of LQG is the hypothesis that space is granular, quantized—rather than continuous. While general relativity posits a continuous space-time fabric, which creates some mathematical problems with infinities, Loop Quantum Gravity avoids such troubles by applying its mathematics to quanta of space.

According to LQG, the tiny (Planck-scale) somethings comprising space are shaped like loops (hence the name of the theory), and form a web-like lattice-like structure called spin-foam. The nodes where the loops intersect create volume; and connecting faces form area.

At an intuitive level, I quite like Loop Quantum Gravity—and find it much easier to connect with than, say, the various permutations of string theory. And am appreciating, right now, its resonance with Brahma’s world-web 🙂 .

Though also, I must admit, am continuing to hear the persistent whisper of Ch’an sage Hui-neng:

Originally, not one thing exists.