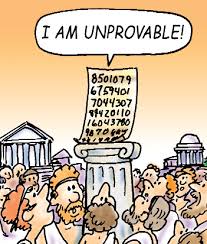 Just finished reading the 2001 edition of Gödel’s Proof by Ernest Nagel and James Newman, edited by Douglas Hofstadter. This is an excellent introduction to Gödel’s Incompleteness Theorem, written in mostly non-technical language—which means that you don’t have to be a professional mathematician to (at least mostly) understand it.

Though still a challenging read, I’d say it’s well worth the endeavor, for those who feel inspired to learn more about Gödel’s revolutionary upset of standard mathematical assumptions.

If God were going to deploy an undercover Zen master to infiltrate the ranks of mathematics, what better choice than Kurt Gödel 🙂 .

The Gap Between Truth & Proof

What makes the Incompleteness Theorem so radical?

In brief: the theorem challenges the reigning assumption that there is a set of axioms from which we can deduce all the truths of mathematics.

The two main qualities one looks for in a mathematical system are (1) consistency, and (2) completeness.

A system is “consistent” if doesn’t give rise to contradictions. In other words, starting from the system’s foundational axioms, we cannot deduce a false statement. If “two plus two equals four” is a statement proven to be true—and “two plus two does not equal four” is also proven true—this would be an example of an inconsistency.

A mathematical system is considered to be “complete” if all true statements can be proven via its fundamental axioms. For any true statement, we should be able to verify the truth of the statement via a proof rooted in the system’s foundational axioms.

What Gödel shows—via his Incompleteness Theorem—is that within any axiom-defined system, there will always be a gap between truth and proof. In other words, there will always be certain statements/formulas/conjectures (about mathematics) that are true, but can never be proven by the axioms that define the system, i.e. can never be reverse-engineered into their primitive axioms.

One example is the statement: Every even number is the sum of two primes. As far as we know, this statement is true; but it can’t be formally proven.

Without getting into the details (which you can read about in Gödel’s Proof), here are some of the most mind-bending implications of  Gödel’s theorem:

While Gödel’s Theorem doesn’t explicitly address issues pertaining to non-conceptual knowing, the fact that it points to limitations of conceptual knowledge makes it resonant—at least metaphorically—with the insights of nondual spiritual traditions.

A central point of Tenzin Wangyal and Anne Klein’s Unbounded Wholeness (which I’ve spoken of  frequently in previous posts) is that the self-evident authenticity of Pure Awareness can never be conceptually authenticated: can never be validated on the basis of a set of logical axioms—because it is non-conceptual self-validating Authenticity itself.

Or, put in a way that echoes Gödel’s Incompleteness Theorem: Pure Awareness is true, but can never be conceptually validated as such. The only true completeness is the self-evident authenticity of nonlocal non-conceptual transpersonal Pure Awareness.

Now, the important difference between (1) self-authenticating Pure Awareness, and (2) a true mathematical statement that can’t be proven by the axioms of a given mathematical system—is that the latter is still conceptual, and potentially proven via a logic that lies outside of the original mathematical system.

A statement about Pure Awareness more closely resembles #2 above. While such a statement (e.g. “Pure Awareness is infinitely luminous and indestructible”) may be formulated according to grammatical rules of the English language, its truth cannot be established linguistically or conceptually—instead only experientially, from a “position” that transcends language/concepts.

In any case, the implications of Gödel’s Theorem remain evocative—like God winking through the mind of a mathematician, in ways we can productively play with.