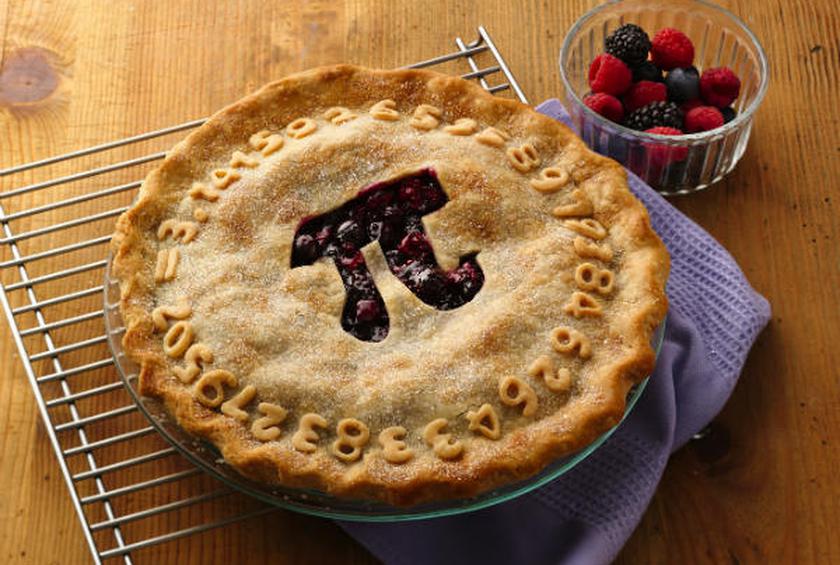 Well, π (the ratio of a circle’s circumference to its diameter) has now been calculated to 31.4 trillion digits. That’s a lot of digits! And represents significant progress, I suppose, towards the completion of an ultimately impossible task (viz. the decimal representation of an irrational number). But fun nevertheless.

Estimates are that it would take somewhere in the neighborhood of 332,064 years to actually recite 3.14159 … all the way out to its newly articulated 31.4 trillionth digit. Even allowing for Taoist longevity practices, that’s quite a few lifetimes 🙂 .

A Slice Of Pi

Last December, at a holiday cookie-making party, a neighborhood boy — eleven or twelve years old, hair drawn into a long ponytail — showed up rocking a t-shirt with a large π printed on the front. I said I liked the t-shirt, and he responded by reciting pi to 30 digits, and telling me he planned to become an aerospace engineer some day, which I fully believed.

Could I even imagine someone reciting pi to 31.4 trillion digits? Or does this necessarily remain a wholly abstract entity?

Another Slice Of Pi

There’s a professional tennis tournament happening now in Indian Wells, California. I’ve been watching some of the matches via livestream, from my Colorado home. The transmission is pretty good, so I enjoy a high-quality image of the match.

If I were to drive toward California, and pause halfway — say in Utah or Nevada — the quality of the livestream would probably be more-or-less the same.

Once I arrived at the Indian Wells tennis center, I could sit on the lawn directly adjacent to the main stadium court, and watch the match on a jumbo-screen mounted on the outer stadium wall. And this would be a significant upgrade in viewing quality (compared to watching it on my computer screen), especially since I could also hear the occasional roar of the crowd from within the stadium — and perhaps even in some sense feel the presence of Roger Federer and Rafa Nadal, being in such close physical proximity.

But actually entering the stadium, and watching the match up-close and in person, rather than as images projected on a screen, represents a difference in kind: a quantum leap, a phase-change of quality.

No matter how high-resolution the livestream image is — and no matter how close the screen is to the stadium (thousands of miles or twenty feet) — the projected image can never be more than a (crude or refined) approximation.

The actual experience of watching the match from within the stadium is simply of a different order. And more so if you happen to be one of the two players, actually standing on the diameter of the circular stadium, fully embodying the ratio.

But (and this is not a consolation prize) it can be directly experienced: It can be realized by apperceiving and knowing it directly — by actually tasting the pie.

Losing information he
rose gaining
view
till at total
loss gain was
extreme:
extreme & invisible:
the eye
seeing nothing
lost its
separation:
self-song
(that is a mere motion)
fanned out
into failing swirls
slowed &
became continuum.