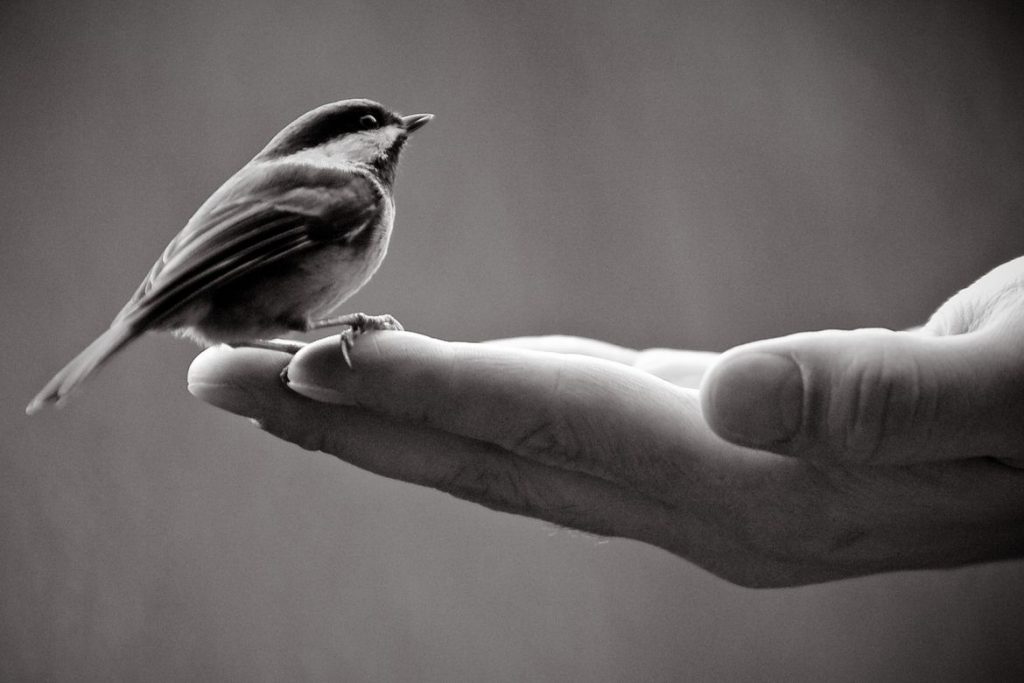 The well-known adage—A bird in hand is worth two in the bush—is typically used to encourage being grateful for what we already have, rather than pining for something currently out of reach.

Putting aside, for the moment, the usefulness of such advice, let’s utilize the imagery itself to explore the notion of separation …

Imagine I have a bird—say, a little Chickadee—resting in the palm of my hand. This would be a most literal instance of “a bird in hand,” yes?

This Chickadee is part of my current experience via several sensory channels:

(1) the tactile channel, because I feel the bird’s smooth soft feathers and hard beak with my hands;

(2) the visual channel, because I see the Chickadee’s silver, white and black body, and the shape of his/her thin legs and feet;

(3) the auditory channel, when the bird chirps, chortles or sings;

(4) the olfactory channel, when I bring my nose close enough to smell the little creature; and

(5) the gustatory channel, if I’m foolish or courageous enough to lick the Chickadee or—we won’t even mention the other option.

Along with the bird-in-hand are two birds in a nearby bush. While the birds-in-bush are not available to the tactile, olfactory or gustatory channels of my human experience, they are still available to my visual and auditory channels. In other words, I can still see and hear those two birds—even though I’m not able to touch, taste or smell them.

All three birds are also, and equally, part of my cognitive experience—to the extent that I name them as “birds” and have various ideas about them, for instance liking or disliking them, desiring to possess them or wishing to get rid of them, etc. This is the conceptual-mind channel of human experience.

So, a bird-experience can be of a variety of types, depending upon the combination of sensory and/or conceptual channels that are involved. If we consider the experience associated with the five sense organs as well as the conceptual-mind as the six primary threads of phenomenal experience—then, mathematically, there are 63 possible flavors of bird-experience!

Does the intimacy, intensity or “closeness” of such an experience depend upon having all available channels present, simultaneously? I would say that it doesn’t—but we’ll return to this question shortly.

[Spoiler: the answer to the latter question depends, in large part, upon our definition of “me.”]

We might answer that the bird-experience unfolds within space-time, since the functioning of the sense organs that are part of a human body requires space-time.

Also, the body of birds and humans alike have dimensionality (height, width, depth) as well as weight—measurements that require space-time as their context.

Alternatively, we might answer that the bird-experience happens only within mind, since it is not the birds per se that are experienced, but only our human perceptions of and thoughts about the birds.

Alternatively, we might answer that the bird-experience appears within Awareness—like waves rising and falling on the surface of the ocean. I refer to something as an “experience” only to the degree that I am aware of it. Hence, Awareness is the necessary ingredient and fundamental substance of the bird-experience.

In ascertaining the closeness of the bird-experience to me, the same three possibilities obtain, depending upon our definition of “me.”

If I define “me” as a human body, then closeness might be defined by the distance between the human body and the bird-body—though this obviously privileges the tactile thread of bird-experience (more on this below). [And also ignores the fact that we share a common atmosphere, i.e. the birds are breathing the same air as this human body is breathing.]

If I define “me” as a human mind, then closeness might be defined by the clarity of thought and/or perception of the bird-experience. How complete or in-focus are my thoughts and perceptions, in the moment of the experience?

If I define “me” as Pure Awareness, then closeness is—by definition, if you will—infinite: complete beyond any notion of completeness. How close is a wave to the ocean? Any sense of there being a spectrum of possibilities, collapses.

What about capturing or securing the bird, say in my hand?

The notion of “securing” a bird—of “possessing” or “owning” or “having” it—tends to imply the elimination of physical separation between me and the bird. I “own” the bird if it abides within the realm of “me” or “mine.” (And, as we’ve just seen, there are various ways of defining “me.”)

If there were no perceived separation between me and the bird, then trying to “obtain the bird” would make no sense. There simply would be no incentive to do such a thing.

It’s because I perceive myself as being separate from something that I desire, that I endeavor to attain that thing.

Presumably, I would count the bird that’s in my hand as a bird that I have secured. Why? Because I conclude—from all the evidence of my human senses—that there is no separation between my human body and the bird’s body. It is, after all, resting right here in the palm of my hand.

And most likely I would consider the two birds that are perched in the bush as not yet having been secured, owned, possessed. Why? Because those birds are resting upon a branch, rather than in the palm of my hand.

I use the evidence of the absence of a tactile connection between the birds’ bodies and my human body to conclude that I have not yet secured those birds, don’t yet possess them.

Put differently: I use the physical distance separating my human body and the two bird-bodies as evidence that I don’t possess those two birds.

(Aside: However, if the bush upon which the two birds were perched were part of an enclosed arboretum that I owned, I might consider them, also, to be “mine.”)

But is this privileging of the tactile sensory channel not a completely arbitrary criteria for ownership?

If I’m attending a concert, listening to a beautiful symphony, do I require tactile contact with each and every instrument to conclude that I’ve fully received the experience of the symphony?

If I’m viewing paintings by Michelangelo and Monet, displayed in a museum, do I require tactile contact with the paintings in order to feel that I’ve fully received the experience of the paintings?

If I’m still seeing the birds and hearing the birds, why not consider this also as being just as intimate and satisfying a bird-experience as touching the bird, just with a different mix of sensory inputs?

And such a distinction has all sorts of practical uses, not only in relation to obtaining a “bird in hand.” Having one’s human body five miles from where a bomb has been dropped, for instance, is quite different—in its practical consequences—from the body being five blocks or five feet from such an explosion.

However, it’s also worth noting—and actually quite interesting—that, from a scientific point of view, my palm is never actually touching the bird nestled in it.

While distances between my hand and various objects can become very small, the human body can never actually touch anything! Why? Because, at the atomic level, electrons never come into direct contact with one another. Their wave packets can overlap, but never touch.

So, even the “bird in hand” is never actually an instance of two so-called material things coming into direct physical contact. While we refer to certain patterns of sensation as “touching” or “making physical contact”—this is just a manner of speaking that doesn’t correspond to actual physical contact between actually separate things.

Something like touch may be experienced, also, as what we might call a subtle-body phenomena. Most of us, I imagine, have had the experience of a “good vibe” or “bad vibe” when someone walks into the room.

And there’s quite a bit of research on the “sense of being stared at,” i.e. how we can somehow feel—in a way that seems like an extension of the tactile sensation—when someone, say from across the street, is looking at us intently.

These would seem to be examples of types of experience that are on the same spectrum as so-called direct physical contact—but don’t actually involve the (presumed) direct contact of physical bodies.

Few would argue against the proposition that there can be degrees of separation—in relation to objects appearing within a Newtonian universe.

I can measure the distance between my right hand and the bird perched on a branch in a nearby bush. I can say: “My hand is twenty feet away from that bird.”

And, based upon the tactile sensation of another bird resting in my right hand, I can say: “There is zero distance between my palm and this bird.”

The experience of seeing and hearing the bird-in-the-bush is at zero distance from the human body-mind that registers these visual and auditory phenomena—and at an indefinable distance from the Pure Awareness that is the ultimate perceiver of such phenomena.

[Aside: A third-party may be able to measure the time it takes for visual/light and auditory/sound waves to traverse the distance between the bird-body and the human eyes and ears—but such a distance is never captured by first-person experience.]

So, both “separation” and “physical contact” are never more than apparent. There is no real separation, nor is there actual physical contact, i.e. the complete absence of separation via two apparently separate things touching one another.

In relation to the bird in hand: while tactile sensation (aka “touching”) is one aspect of this bird-experience, when we look through an atomic/subatomic lens, no actual touching is happening.

So, as it turns out, we always and already “have” both the bird in hand, and the two birds in the bush 🙂