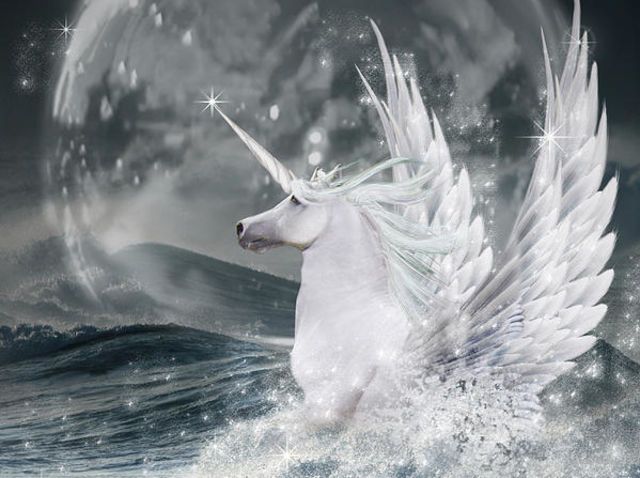 Was thinking of unicorns the other day—curious, in particular, about whether their one horn was also called a “unicorn.” It made sense to me that this would be the case, but I wasn’t certain, so set off to explore …

A few Googles later, here’s what I had learned:

The root of the word unicorn is the Latin adjective unicornis (having one horn)—from uni (one) and cornus (horn).

The horn itself, however, is not typically referred to as a “unicorn,” but rather as an “alicorn.”

And, as it turns out, there’s also a mythological creature—a winged unicorn—known as an “alicorn,” from the Latin alati (winged) and cornus (horn).

So, it is with the alicorn that we have an example of a creature whose general name is also the name of its defining characteristic. When we say “alicorn” we could be referring to the winged creature in toto, or just to the single horn affixed to the alicorn’s head.

In similar fashion to an alicorn having an alicorn, is Awareness being aware.

In this grammatical formulation, the implication is that there is something called Awareness, whose defining characteristic is awareness (i.e. being aware).

But Pure Awareness, of course, is not a phenomena in the same way that an alicorn (however mythological) is a phenomena. Unlike the alicorn, Awareness as such does not have a shape, size, weight, sound, color or other defining phenomenal characteristics.

Would it be fair to consider the capacity to be aware as a noumenal (rather than phenomenal) characteristic?

But even the word “characteristic” tends to imply a separate thing to which the characteristic applies. In this way, it’s similar to the term “substance” with its vestigial materialist assumptions.

In Buddhist philosophy, the word “grasping” is a technical term pointing to the tendency to reify—to “make real” as separate and independently existing—various phenomenal appearances.

But things thus reified—cognized as being independently-existent, from their own side—are no less mythological than are unicorns and alicorns. And once we’ve (mistakenly) made them real in this way, we tend to enter into dynamics of attachment and repulsion, which creates unnecessary psychological suffering.

Is Awareness an Entity?

The alicorn example has proven useful as a tool to notice any kind of reification of Awareness—i.e. relating to it as an entity, a phenomena, a thing to hold onto.

What makes Awareness infinite, eternal and indestructible is, precisely, its no-thing-ness.

Awareness doesn’t “have awareness” in the same way that an alicorn “has an alicorn.”

* Awareness is not a noun, because it’s not a phenomenon.

* It’s not a verb, because it does not happen in time (rather, time appears in it).

* Awareness is neither an adjective nor an adverb, because its characteristics (if we can even speak of such) are non-phenomenal.

A Thorn To Remove a Thorn

So, while the phrase “awareness of Awareness” can be a useful tool to help us recognize Awareness, it needs to give way, eventually, to simply noticing and abiding as Awareness, with no tendency at all to reify this non-phenomenal experience.

And the certainty that arises, in relation to the reality of Awareness, is in inverse proportion to any vestiges of reification of Awareness as a phenomenal entity.