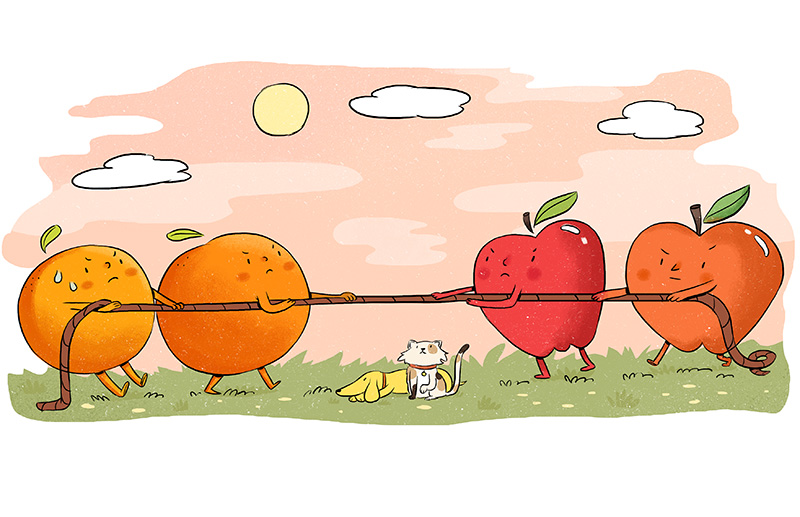 The perception of any kind of phenomenal characteristics—size, shape, color, texture, taste, scent, etc.—and the assigning of names to the objects of our perception—requires discrimination. It requires that we notice differences.

And understanding difference means, simultaneously, understanding sameness. I can say—“Both of these animals are horses”—because I perceive certain characteristics that the two have in common: that are the same, from one horse to the second horse.

Sometimes determining what is the same and what is different is straightforward. And at other times it’s a bit more tricky.

In mathematical topology, for instance, what counts as the same or different, in relation to the characteristic of shape, is quite nuanced. The shape of a coffee mug and the shape of a donut—which at first glance seem quite distinct—turn out to be topologically equivalent.

In other words, one shape (say, the coffee mug) can be stretched and transformed into the other shape (the donut), without any cutting or pasting. In relation to their topological characteristics, a coffee mug and a donut are the same.

In any case, the same/different mental polarity is foundational to the name-and-form (Sanskrit: nama-rupa) aspect of our experience. It’s the engine that allows phenomenal perception, cognition, and language to function. It’s what allows skillful navigation within the realm of body-mind-world.

One flavor of sameness is simultaneity: two events happening at the same time.

However, according to Einstein’s Theory of Special Relativity, simultaneity is never absolute. Instead, it is relative to the position of the observer of the two events.

If I’m sitting on a hilltop midway between Los Angeles and San Diego, I will perceive lightning strikes originating in L.A. and San Diego as simultaneous: as happening at the same time.

Why these differences in the perceived temporal sequence of the lightning strikes? Because the light emitted from the strike takes a certain amount of time to reach my eye—and the farther away my eye is from the strike, the longer it takes the light to reach it.

So, what’s the truth of the ordering of these two lightning strikes?

The take-home point is that so-called simultaneity (events happening at the “same time”) is always relative to the location of the observer.

I may decide, for instance, that I’m going to gather in a wicker basket only pieces of edible fruit. So, I place in the basket an orange, an apple, and a banana. These three pieces of fruit are the same in relation to the characteristic “edible fruit.”

But then I change my mind and decide that I wish instead to gather in my wicker basket only things that are spherical in shape. So, the apple and orange can stay in the basket—but the banana (now deemed different) needs to be removed. After removing the banana, I place a tennis ball—another spherical object—in the basket with the apple and orange. These three items are the same in relation to the characteristic “spherical objects.”

The take-home point is that “sameness” is always relative to one or more characteristics that we deem to be relevant. So sameness (or difference) between two objects is never absolute.

But what about degrees of similarity? It would seem to make sense to say that an apple is more similar to an orange, than it is to a tennis ball.

If we were able to exhaustively describe an object in terms of the sum of its characteristics, and then do the same for a second object—presumably we could then establish a degree of similarity based upon how many characteristics they have in common.

We could agree that objects that are identical—the same across all characteristics, including space-time location—are not actually separate objects, but rather the same single object. But aside from this special (and seemingly trivial) case, does it make sense to speak in terms of degrees of similarity?

While this may be useful in certain contexts, still it is relative to the human sensory/cognitive apparatus. For a human, an apple may appear to be more similar to an orange, than it is to a tennis ball. But when perceived by a dog, or a bat, or a ladybug, or a salmon, or a dinosaur, or an alien from a distant planet—the conclusion re: degrees of similarity may be quite different.

Nondual spiritual inquiry is based largely upon viveka (discrimination), in which we see and understand clearly the difference between the perceiver and the perceived, between unchanging Awareness and everchanging phenomena.

We experience directly and with certainty that: I as Pure Awareness am independent from the phenomena which appear to or within me.

In other words, I am—in some important sense—different from phenomenal appearances. How so? I am unchanging and eternal (i.e., indestructible), while phenomena are ever-changing and impermanent.

And yet, it seems equally true that …

After all, how would perception of phenomena be possible if we didn’t share a common Reality which is the medium of this perception?

What’s the source of this apparent paradox?

Same/different is a conceptual polarity—which functions only at the level of mind. While this polarity is the heart of name-and-form (nama-rupa)—as we’ve seen above—it has no meaning from the point of view Pure Awareness. Like all conceptual polarities, it belongs to mind alone.

We simply can’t say that Pure Awareness is the “same as” or “different from” this or that phenomena (or all phenomena, collectively)—because Pure Awareness has no phenomenal characteristics by which such an evaluation could be made.

We can’t say that Pure Awareness is the “same as” or “different from” phenomena because “same” and “different” presume a two-ness—the identification and comparison of distinct things—that does not in Reality exist.

What would it require to say that the ocean is the “same as” or “different from” a wave? It would require that we extract a wave from the ocean—put it off to the side. And then compare that extracted wave with the ocean, in relation to some particular characteristics. Clearly this is impossible!  Why? Because the moment we attempt to extract a wave from the ocean, it ceases to exist as a wave. A wave only exists with the ocean as its substance.

Pure Awareness is independent of the same/different polarity—in the same way that it is independent of all phenomenal appearances, and all conceptual polarities. But this independence does not require an exclusion of any phenomena. Quite the contrary. How could the ocean, speaking from its full depth and breadth, possibly exclude the waves?