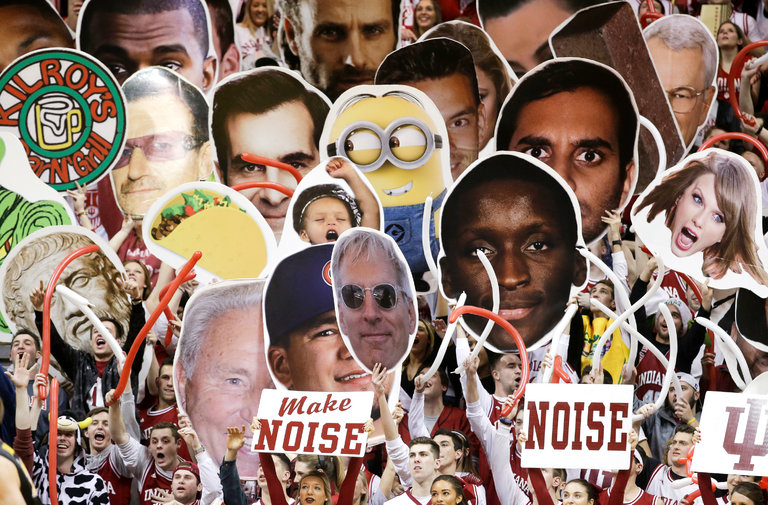 Coming to mind, in recent days, is the advice often given to those embarking upon spiritual practice, to create a mostly-quiet distraction-free environment – as support for attending to more subtle aspects of experience. Down the road (we are told) the ideal is to be able effortlessly to abide in and as the “natural state” (of knowingly awake nondual Presence) throughout our daily lives.

But this is later – when our minds have knowingly become meditation; and our physical activity arises with the spontaneous perfection of wuwei (the Taoist term for “non-volitional action”). For now, it’s wise to stack the phenomenal deck in our favor, whenever possible, by creating a container inherently supportive of meditation, yoga, qigong or whatever other form we’re exploring.

I attribute these thoughts to my toggling back and forth, as of late, between Roger Federer and the Golden State Warriors: between the pristinely polite culture of tennis, and the raucous milieu of an NBA basketball arena. What an interesting play of opposites!

To explore the differences (and similarities) let’s consider the moment, in each game, that tends to be the most “meditative” – i.e. the most in need of relaxed and open focus; of gathering one’s attention and tuning out distractions, in order to execute a particular skill.

In tennis – I would submit – this is the serve. The ball is tossed – perhaps into a windy sky, or the glare of midday sun, or a light drizzle – to be met then with the precision of a racket swing, propelling the ball (if all goes well) at speeds exceeding 100 mph, into the designated territory of the opponent’s side of the court.

In humble acknowledgment of the difficulty of this task, the crowd — no matter how large — draws collectively to a hushed silence, so as not to disturb the player during this crucial moment. If the match is being played outside (as a majority of them are) then Mother Nature may be contributing all variety of distractions – from blistering heat to swirling winds to diminishing light at dusk or tricky late-afternoon shadows – but distractions from the crowd, from human observers of the contest, are (by general consent) reduced to an absolute minimum. For that long moment, Roger Federer — or whomever else it may be — gets to be alone in the quiet of his meditation hut.

Within A Tier Of Wildly Waving Arms

In basketball, the moment more-or-less equivalent to a tennis serve is (it seems to me) the shooting of a free-throw. From the continuously interweaving flow of the game in its usual mode, all comes to a stop. A single player — Steph Curry, shall we say? — steps to the free-throw line. Instead of being one-among-five, or one-among-ten, all eyes are now upon him and him alone. And while the physical distraction of the opposing players has temporarily been removed, what looms large is the expectation that (apropos of its name) the “free” throw should be relatively easy.

But like a tennis serve, the mechanics of such a shot are actually quite complex. And – in stark contrast to the hushed quietude of a tennis stadium – the basketball arena is likely filled with fans who are anything but silent, in moments such as these. On the contrary, what in all likelihood is filling the visual field of Steph or Klay or whomever else is shooting the free-throw are ascending tiers of wildly waving arms: hundreds of people raucously gesticulating, with or without big-heads or any number of other shiny, rippling props designed specifically to distract the attention of this player. All this along with shouts, screams, taunts and any other sound they can think of making. Certainly this qualifies as a rather “advanced” meditation-in-daily-life challenge, yes? If Steph in this moment is in his “meditation hut,” then it’s a hut created solely in the confines of his own mind, with next to zero support from external conditions.

Now the one-on-one intensity of tennis — singles matches in particular — can have a distinctly gladiatorial vibe: not unlike an old west shootout at high noon; or armored horsemen bearing deadly jousting lances, galloping full-speed at one another from opposites ends of the field. Take away the net and rackets, and it’s basically hand-to-hand combat: man against man; woman against woman.

But of course it’s precisely the presence of the net and rackets that make tennis what it is: a “battle” in which human bodies never actually come in contact – not to mention violently collide — save for the cordial handshake or friendly embrace at the end of the match (with the net still between them, signifying a lady-like or gentlemanly distance). Neither bullets nor sharpened lances but rather soft furry green rubber balls, are hurled back and forth. Between each point, players can pause to wipe the sweat from their brow. And every ten minutes or so, they sit down in the shade, and enjoy a sip of water and/or a snack. What could be more civilized?

Rivers Of Sweat In The Roman Coliseum

And what a stark contrast a tennis match is, to the experience of a basketball player – where physical contact with opposing players is happening more-or-less continuously. Where rivers of sweat not infrequently overflow from bodies onto the court itself (requiring quick mop-ups). Even the elegant sharp-shooting of Steph or Klay just serves to highlight the more general atmosphere of an intensely physical in-the-trenches battle, with the crowds roaring with Roman-Coliseum intensity.

What’s In A Game?

As in sport, so in life and spiritual practice, we encounter obstacles subtle and gross:

Those are the most common gross obstacles (and corresponding needs) to be related to. But of course there are more subtle psychological needs – say for human contact (physical and emotional) and a sense of purpose, whose lack of fulfillment can also become obstacles — and a whole host of subtle mind-level obstacles that arise in the context of a meditation practice.

Whatever the obstacle (gross or subtle) it is of course challenging … because it’s designed to be challenging. The trick is to avoid making obstacles/challenges into problems – but rather to relate to them in the mode of a game. It’s the obstacles that define a game – that make it both challenging and (at least potentially) quite fun!

So — can we relate to our spiritual endeavors and explorations also as a kind of game or sport? As something we engage with in with a spirit of playful seriousness, and serious playfulness? Seems a good way to go … whether in the gentile mode of tennis, and/or the pulsing physicality of hoops: your choice!