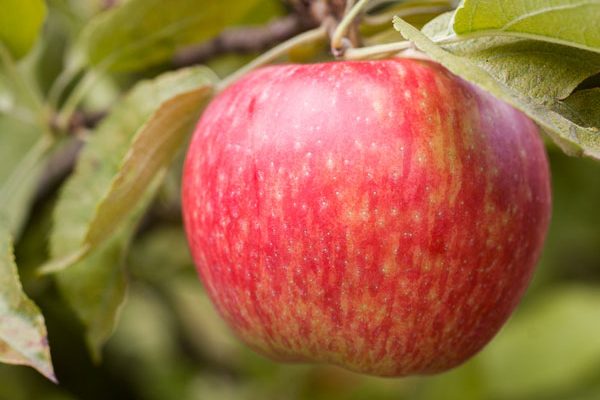 My first direct experience of the Honeycrisp apple is visual: shape and color. The apple is basically round, and mottled red-green-gold in color, with a small brown stem.

The next experience is tactile. When I pick the Honeycrisp apple up, it feels basically smooth (except for the stem sticking out) and exhibits a certain heaviness in my hand. It has both texture and weight.

Bringing it closer to my nose reveals a subtle smell, hard to put in words. Taking a bite adds the experience of taste: sweet with a hint of tart and (à la its name) nicely crisp.

Once the bite has been taken, the apple-surface available to my touch and vision has changed. What used to be “inside” (an image via inference in my mind, based perhaps on previous experience of biting into an apple) is now on the surface. The white meat of the apple can no longer be called entirely “inside”—because at least a section of it has become continuous with the apple’s outer skin.

So, that’s my direct experience of seeing, touching, smelling and tasting a Honeycrisp apple—which, presumably, is in no way dependent upon my knowing the name, “Honeycrisp apple.”

What’s It Made Of?

Now let’s consider the question: What is a Honeycrisp apple made of?

The “made of” formulation can take us in two directions:

1. If “made of” refers to all the things that—over time—allow the apple to appear, this is also known as its “causes and conditions.”

So, for instance, the apple requires an apple tree, with its leaves and branches. It also requires the soil and its nutrients, that the roots of the tree draw up into its branches. And it requires the sunlight and rain.

These are just the most obvious causes and conditions, required for the Honeycrisp apple to appear. If we “zoom out” far enough, we discover that the apple is made of—if not the entire universe—then a substantial portion of it!

2. If “made of” refers to the apple’s innermost constituents—i.e. what we discover when we “zoom in”—this is typically referred to an its “substance.”

So, for instance, the apple contains various biochemical constituents (vitamins, minerals, amino acids, etc.). If we “zoom in” far enough, we find molecules, atoms and then subatomic particles. And then, eventually, quantum fields—tremoring undifferentiated space, energy and information.

“Beneath” and “behind” and “within”—the assumption of something hidden from direct view—are all abstractions and/or inferences: concepts pointing to something that is beyond my immediate direct perception.

The way that we make what’s “beneath” or “behind” or “within” perceptible is by changing our perceptual lens, aka our frame of reference.

By viewing through a microscope or the operation of the large Hadron collider, we access the “substance” aspect of “made of.”

By viewing through a telescope or other “zooming out” mechanisms, we access the “causes and conditions” aspect of “made of.”

How a dog or an ant experiences a Honeycrisp apple is, presumably, much different than how a human experiences the apple—because of the different sensory/cognitive apparatuses.

So even so-called direct sensory perception is relative to the sensory organs that are available. Dogs can hear things directly that most humans cannot. Bats can navigate at night with much more skill than humans, through their use of echolocation.

Two Sides of the Same Coin

Another way of putting it is that phenomenal objects appear in dependence upon the phenomenal subject through which they are perceived.

If the subject (the perceiving apparatus) changes, the object (that which is perceived) will also change. Why? Because subject and object are two sides of the same coin.

If I flip the coin, both sides move, simultaneously … 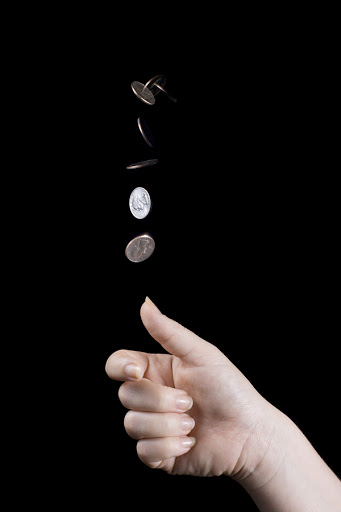 What is it that holds the subject/object coin in its hand, and then flips it?

Or, put differently: What is the substance of the coin itself?