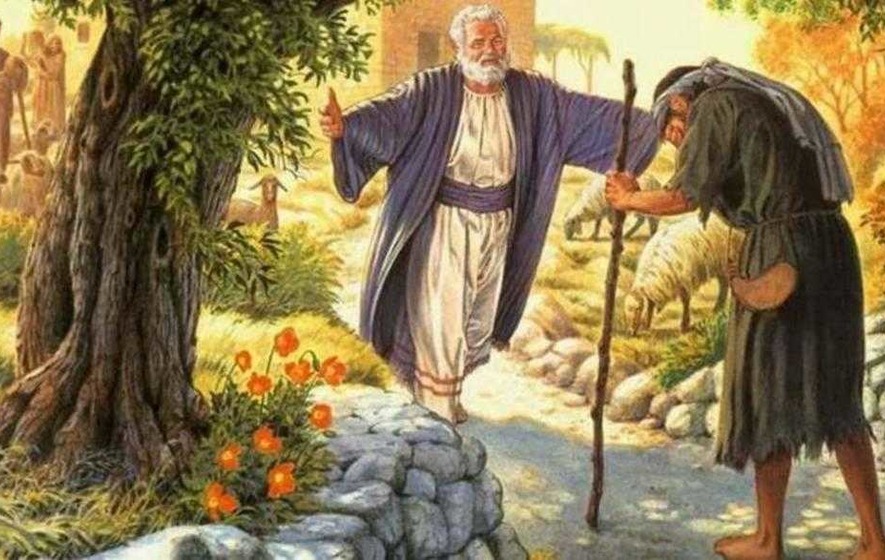 The Parable of the Prodigal Son

In the parable of the prodigal son—shared by Jesus with his disciples—a father has two sons. The older son stays close to home, being faithful to his familial duties and frugal with his funds.

The younger son takes his inheritance and leaves town, wanders far and wide, and lives in a reckless, wasteful and extravagant way. Eventually—with his fortune squandered, destitute and impoverished—the younger son returns home. His intention is to apologize to his father and beg him to take him back as a servant within his original home.

But the father’s response is not to heap scorn on his younger son, or relegate him to the position of a servant. Instead, he welcomes him home with open arms—and throws a big party in celebration. Meanwhile, the older son seethes with resentment and jealousy, and refuses to join in the festivities.

Noticing his older son’s anger and confusion, the father explains: “You are ever with me, and all that I have is yours: you needn’t doubt my love and affection. But your younger brother was lost, and now he is found—which is cause for celebration.”

The Abuse of Grace

In its traditional Christian interpretation, the prodigal son symbolizes the abuse of grace—of something valuable that is given freely.

The younger son enjoyed the grace of a good home: a loving father; generous provisions of food, clothing, shelter; a financial inheritance; and the comfort and dignity of belonging to a respected family.

Yet he traded all this in for indulgence in worldly temporal pleasures—until their enjoyment was exhausted.

To the extent that we have forgotten our Divine inheritance—our position as children of God—we are the prodigal son: lost and wandering, mistaking superficial pleasures for the peace and joy we most deeply desire.

The parable of the prodigal son draws a strong distinction between temporal pleasures and heavenly joy—and urges us to opt for the latter, i.e. to “return home” to God.

One finds a similar distinction in Greek philosophy, between hedonia and eudaimonia. Hedonia represents carnal pleasures; while eudaimonia a more fundamental well-being: a contentment and flourishing that corresponds with living well, in alignment with deeper truths.

The parable of the prodigal son might also be interpreted in relation to our moment my moment experience—of the arising and dissolving of thoughts, perceptions and sensations.

Thoughts, perceptions and sensations are sons and daughters of Awareness. As such, they are naturally:

Certain thoughts, perceptions and sensations—like the parable’s older son—stay close to home. They remain knowingly infused with the grace of Awareness, throughout the cycle of their arising and dissolution.

Other thoughts, perceptions and sensations—like the parable’s younger son—become, in some measure, prodigal. They renounce/forget their origin as Awareness, and hence fall out of grace.

But pristine Awareness—as the father of both the older and the younger son—is always in the position of loving, appreciating and welcoming them home.

These are just three ways of saying the same thing.

Mindfulness as Host vs. Guest

If I’ve taken the position of a guest—a separate human body-mind—then phenomena appear within my corresponding world, and then disappear. As the phenomena dissolve, there’s a sense of losing them. They’re no longer in my world.

If I’ve taken the position of the Host—as pure Awareness—then phenomena appear like children being born, wandering (near or far) for a while, and then returning home. As the phenomena dissolve, there’s no sense of losing them—rather of embracing them again, welcoming them home—like a parent welcoming into his or her arms their returning prodigal son or daughter, any prior seeming separation dissolving into unconditional love and acceptance.

When I become just as interested in and welcoming of the dissolution of phenomena as I am in their appearance, an intimacy arises with the vanishing point—the “place” into which phenomena dissolve.

And if I remain gently attentive to that “space” into which the phenomena has dissolved—and understand that this is the “space” from which the next appearance will arise—then this can become a fun game …. Watching, with curiosity, for the appearance of the next thought, next image, etc.

T.S. Eliot calls it the still point of the turning world:

Tip for beginners: Intentionally generate a simple thought—e.g. the line “row, row, row your boat, gently down the stream; merrily, merrily, merrily, life is but a dream.” Then watch closely the dissolving of the final word—dream—and stay there. This is the “place” out of which the next thought will appear.

You can do the same thing with an image. For instance: imagine a pink elephant. See it, internally, in as much detail as you can. Then allow the image to dissolve, and stay there in the inner “place” into which it has dissolved. This is the “place” from which the next image will arise.

In this way, the intentionally generated thought or image can support us in locating the gap or still-point—as a gateway to the source of all phenomena.