You are here: Home / Nonduality / Practice Notes: The Transitivity Train 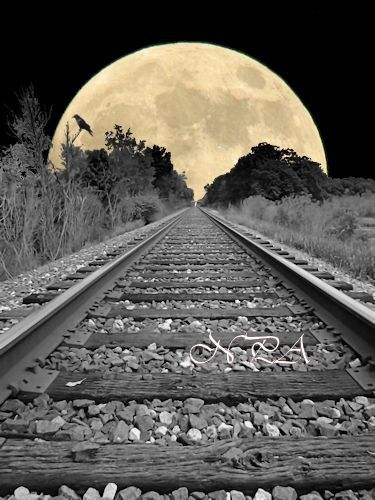 Among the great sayings (mahavakyas) of the Upanishads—central to the teaching of Advaita Vedanta—we have this one from the Chandogya Upanishad, spoken in a second-person voice, something a teacher might say to a student as a pointing-out instruction: Tat tvam asi.

The English translation of this saying is That thou art or Thou art That. And its basic assertion is that Thou—i.e. Atman, your inner most identity, the seemingly limited spark of Divinity within you—is none other than That—i.e. Brahman, infinite and eternal Being, Consciousness, and unconditioned Joy.

And then there is this mahavakya from the Brihadaranyaka Upanishad, that is spoken instead in a first-person voice, an expression of direct apperception of the deepest truth, within one’s own experience: Aham Brahmasmi. The English translation of this saying is I am Brahman or I am Divine.

Seeing this directly is to see also that phenomenal differences and separation are only apparent, illusory, relative.

A common objection to this sort of teaching goes something like this:

If I and all beings are equally Divine, then that means that I am equal to Ramana Marharshi, and I am equal to Hitler, and Hitler and Ramana Maharshi are equal to one another. But how can this be?

The traction that this objection generates has to do in large part with our resistance—on ethical/moral grounds—to equating Ramana with Hitler. There may also be resistance to equating ourselves with a fully realized sage such as Ramana Maharshi, particularly if our experience is still bogged down in suffering. And there may be resistance to equating ourselves with Hitler: a character typically associated with almost unthinkable levels of cruelty and ignorance.

In short, we chafe at the idea of letting go completely of any and all phenomenal differences, or of considering them mostly or wholly irrelevant. And we believe that acceptance of the mahavakyas requires us to do this.

Is this a valid objection?

As tools for exploring this objection, and the question of its validity, the mathematical notions of equality and transitivity may be useful. In particular, we can ask:

Does the “am” in statements such as “I am Divine” and “you are Divine” indicate a relationship of mathematical equality?

My guess is that this is the assumption that’s often being made—and since one of the properties of mathematical equality is transitivity, this allows us to reason in the following way:

This feels like an absurd consequence—and it is. But does the fault lie in the mahavakyas, or in one of our other assumptions?

Let’s further unpack the reasoning that might lead us to this conclusion, and the uncomfortable feelings that accompany it.

In mathematics, transitivity is a property that defines certain relations—including the relation of equality. A formal definition of transitivity, across any relation (R) is as follows:

If aRb and bRc, then aRc — where “R” is a particular relation; and a, b, c are variables (terms that may be replaced with objects); and the result of replacing a, b, and c with objects is always a true sentence.

As mentioned above, mathematical equality is one relation whose properties include transitivity. Here’s a less formal definition of transitivity along with a couple other properties that also hold for equivalence relations:

For the relation of mathematical “equality,” here’s an example of the transitive property:

But equality is not the only relation that exhibits the property of transitivity. Let’s have a look at some other relations for which transitivity also applies.

For the relation “parallel to,” an example of the transitive property is:

For the relation “greater than,” an example of the transitive property is:

So far, our examples have been drawn from the realm of formal mathematics. Can we apply the transitive property also to human activities and circumstances? Sometimes we can, for instance with the relation of “is taller than”:

We can see that transitivity also holds in this daily-life example of the relation “is a subset of”:

But sometimes the application of the transitive property is unsound, for instance for the relation “defeats” in the context of sporting competitions:

And here’s another example of a faulty application of the transitive property, with the relation “gives birth to”:

The point here is that the mathematical principle of transitivity can be usefully and soundly applied in certain everyday contexts, but not in others.

Now that we’ve explored transitivity in a bit more detail, let’s return to the question:

Does the “am” in statements such as “I am Divine” and “you are Divine” indicate a relationship of mathematical equality?

As you’ll recall, the main properties of an equality relation are:

In terms of our primary question, one of our variables needs to be Awareness (or the Divine, or God, or Brahman). So let’s assume the variable “a” represents Awareness.

Given these assignments of the variables a, b, and c — does the reflexive property hold? In other words, does Awareness = Awareness? To my ear, this works quite well, and brings to mind the Biblical passage: “I am that I am” or “I am who I am.”

The reflexive property also holds for both Hitler and Ramana:

Here there’s some slippage and ambiguity in meaning, which is perhaps more easily discerned in the examples:

The symmetry works only if we’ve already dissolved all notion of separation or limitation with respect to “me” and “Hitler” and “Ramana”—so that what in name/form appears as statements indicating symmetry among different objects, is actually (in essence) just a restatement of the reflexive property.

But someone making the Hitler-Ramana objection isn’t speaking from this point of view. For them, the difference between Hitler and Ramana is real—hence the objection to (presumably) equating them.

At this point in our exploration what we need to see is that the relationship between Awareness and phenomena is not symmetric. Why?—Because Awareness pervades all phenomena, but phenomena (individually or collectively) do not fully pervade Awareness.

In the Bhagavad Gita, chapter 9 verse 4, Krishna proclaims: “By Me, in My unmanifested form, this entire universe is pervaded. All beings are in Me, but I am not in them.”

In other words, the Absolute retains its absolute independence, even in the presence of phenomena. For this reason, the relationship between Awareness and phenomenal appearances is not a mathematically symmetrical one (and to assume that it is, is to make a category error).

Without this quality of symmetry, there can be no mathematical relation of equality.Even though each of our three variables (Awareness, Ramana, Hitler) passed the reflexivity test, their combinations don’t all pass the symmetry test.

We’re left now with the question: Does the transitive property hold, in the case of Awareness and a pair of phenomena? And we’ll continue to explore this—in terms of relations other than the equality relation.

But in terms of the equality relation, the question has become moot, because we’ve shown that the required symmetrical property does not apply—which means that the relationship between Awareness and phenomena cannot be one of mathematical equality.

Awareness & Phenomena: What Is The Relation?

Is there a relation other than the relation of equality, for which the transitive property will hold—when considering the case of Awareness, Ramana, and Hitler?

One possible candidate—often invoked in discussions such as these—is the relation “is the substance of.” Here’s an example of this relation at least potentially demonstrating transitivity, when all three objects are phenomena:

Is this statement true or false? To my ear, it’s rather ambiguous. Though technically true, does it accord with my experience? if I came across an ice-statue—say of a dog—would I think to myself: “The substance of this statue is water”? Maybe, maybe not.

What if we expand the transitivity in the following way:

If I happened upon a dog-shaped ice-statue, would I think to myself: “The substance of this statue is hydrogen and oxygen molecules”? Maybe—though probably not.

We could continue in this vein, drawing out the transitivity reasoning in terms of the relation “is the substance of”—all the way to subatomic particles, strings, Awareness—or whatever other “substance” we consider foundational.

But the case of Awareness, Ramana, and Hitler is not really like water, ice, and an ice-statue—and more like gold as the substance of both a ring and a bracelet. So our transitivity reasoning might begin with:

Here’s the valid equality and transitivity:

Compare with: melting two ice cubes in a single bowl of warm water. In this case the substance (water) that remains when the two ice cubes melt is undifferentiated (not-two).

At first blush, this seems like a satisfying resolution to our dilemma. In their essence/substance, Ramana and Hitler are identical—but in other non-essential ways they’re totally different. But does such a conclusion hold up to closer examination?

Awareness Is Not An Object

If aRb and bRc, then aRc — where “R” is a particular relation; and a, b, c are variables (terms that may be replaced with objects); and the result of replacing a, b, and c with objects is always a true sentence.

Notice, in particular, that this definition specifies that the variables a, b, and c represent objects: phenomena with definable characteristics.

But Pure Awareness is not an object—is not a phenomena that can be identified via its size, shape, color, texture, taste, smell, or designated as a mathematical entity.

If transitivity applies only to clearly definable objects, then it can’t be applied to Pure Awareness—except perhaps in a more informal or metaphorical way.

Even the notion of a “relation” implies separate objects which then enter into this or that form of relation with one another. But since Awareness can never be found as a separate object, its “relation” to any and all phenomena is utterly unique.

What we’ve learned thus far is that mathematical equivalence is not a valid way of describing the relationship between Awareness and phenomena—because neither the symmetry nor transitivity properties required by equivalence relations apply to non-phenomenal Pure Awareness.

So the following argument is definitely unsound, not valid: a transitivity train-wreck, we might say 🙂 —

The various names and forms that populate our phenomenal experience are—to use the language of Christian theology—mere accidents. They are incidental expressions of a common substance. The substance is the Holy Spirit; and phenomena collectively are the Body of Christ. Perceived separation, into distinguishable names and forms, is accidental.

But at the level of our human experience, accidents (in both the theological and mundane sense) can have very real consequences. If I mistake a coiled rope in a dimly-lit shed for a poisonous snake, the fear that I feel may cause my heartrate to increase, my palms to sweat, and my mind to spin out a wide variety of worst-case scenarios. Perhaps I’ll turn and run so fast that I hit my head on the corner of the door, and fall unconscious onto the floor. Though the snake was not real, my mistaken perception of the rope (as a snake) catalyzed a whole series of consequential body-mind events.

In similar fashion, illusory ignorance can create suffering that is experienced as being very real. This is part of the irony and tragedy of dualistic ignorance. Though there’s nothing (ultimately) real about it, its effects can be experienced as genuinely painful and damaging.

So perhaps the difference between experiencing Ramana and experiencing Hitler is something akin to the difference between seeing a coiled rope and (mistakenly) seeing a poisonous snake. Though in essence there is no difference (by virtue of their actually being not-two)—until we perceive this directly, consequences will in fact differ. And as long as our experience includes these radically differing consequences, we will object to any argument that invalidates this.

In the moment of speaking and authentically apperceiving the meaning of these mahavakyas, perceived differences—along with any and all arguments regarding their validity—have dissolved, like ice cubes in a warm bowl of water.