This time of year/place—springtime in the northern hemisphere—easily brings to mind the theme of resurrection.

But first it comes to the senses: the warming temperatures and steadily lengthening days; the sight and scent of fragrant blossoms; the lime-green newness squeezing out from seemingly dead branches. It’s glorious!

Here’s a poem by Lucille Clifton that—to my ear—captures quite beautifully the spirit of spring resurrection:

Now obviously Jesus, as such—i.e. as a historical figure—wasn’t green in color. (Milarepa … maybe 🙂  ) And the blades of grass that emerge from the ground in spring don’t each come bearing the literal “face of Jesus.” And the planet Earth—so far as we know—isn’t orbiting within the heart, belly, or big toe of Jesus, the man.

Nevertheless, it seems perfectly legitimate to describe the lines and phrases of Ms. Clifton’s poem as being precise. Why?

Because poetic precision isn’t about literal truth. And it’s not about consistency within a single well-defined frame of reference.

The precision of a poem—with its tools of rhythm, tone and metaphor—is not the same as mathematical or logical precision.

Poetic precision involves frames of reference dancing with one another—and the playful, intuitive spaciousness that this invites within the heart-mind of the reader.

Poetic precision has the power to unveil non-conceptual meaning: the kind of understanding that arises from the release of preconceptions. Giddiness and awe are its bedfellows.

If we’re thinking of Jesus only as a historical figure, then Ms. Clifton’s poem makes no sense at all. What would the word “Jesus” have to refer to—in order for the poem to make perfect sense? This is the question that is the key to unlocking the poem’s revolutionary precision: its deepest truth.

When we enter the space between established frames of reference, we unleash the potency of the metaphor—while simultaneously (and perhaps most importantly) understanding the relative nature of all frames of reference. This is poetic precision.

Operations within this specified frame of reference are precise to the extent that they abide by these definitions—and produce outcomes that validate them. 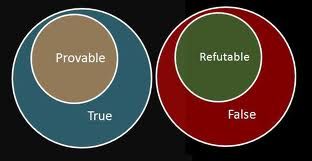 Yet Gödel’s Incompleteness Theorem—whose central dilemma is represented in the illustration above—and the Heisenberg Uncertainty Principle show us that at the edges (or the core?) of mathematical, logical and scientific inquiry, precision becomes a bit less precise: more fuzzy and/or indeterminate.

And, as Gödel established, within any formal set of mathematical axioms, there will always be statements that remain unprovable—undecidable—by the algorithmic operations of the system.

At least some of the uncertainty one finds in scientific as well as philosophical contexts is related to the limits of sensory direct perception, via our human body-mind.

Among the more interesting and well-known of questions that remain undecidable (via sensory direct perception), we might include:

* If a tree falls in a forest, and there is no one there to hear it, does it make a sound?

* Did the treasure-chest of gold coins I uncovered from the ground by digging, exist before I dug it up?

* Is Schrödinger’s cat dead or alive, before we open the box to see?

* Is a photon wave-like or a particle-like?

In each of these cases, sensory direct perception alone cannot resolve the issue. And this creates a certain degree of fuzziness—a lack of precision, one might be tempted to say—in our attempts to answer the question.

We may rely upon the precision of logical inference or mathematical reasoning to hypothesize a solution—but such operations exclude our subjective sensory experience.

Does the exclusion of subjective sensory experience make such arguments more or less precise? This depends, of course, on whether we’re equating “precision” with mathematical/logical abstraction—or inviting it to include the full range of sensory experience.

Which brings us around again to the power of poetry—fueled not by algorithmic but rather metaphoric precision.

She Calls It A Fox

Here’s another poem by Lucille Clifton, on a topic related to but perhaps even more dramatic than resurrection …

my dream about the second coming

when Something drops onto her toes one night
she calls it a fox
but she feeds it.

Once again, the precision of this poem has nothing to do with its literal truth. Quite the contrary, in fact.

Why did Ms. Clifton write “when the snow in her hair melts away”—instead of a more literal rendering, such as “when her white hair became brown again”?

The intersection of two frames of reference—the circular movement of the seasons, and the presumed linearity of a human life—opens the possibility of a “second coming.”

And that amazing final stanza …

when Something drops onto her toes one night
she calls it a fox
but she feeds it.

What is this “Something” that “drops onto her toes one night”? The word “something” might seem to be the most imprecise word one could imagine, right?

Yet in this context it becomes infinitely precise. Why?

Because the non-conceptual (and hence non-linguistic) Something that mary gives birth to is too amazing even to name—even to call God or Tao or Buddha-nature.

So the poem, while pointing to “it”—simultaneously deflects any impulse we might have to actually name it. It does this, first, by referring to it with the utterly amorphous yet capitalized Something.

The mind wonders: what is this mysterious “Something” important enough to warrant a capital “S”?

The final two lines of the poem—in koan-like fashion—address this question by evading any answer that we may have been expecting; leaving us with an image that simply evokes the unspeakable mystery of it all:

she calls it a fox
but she feeds it