You are here: Home / Nonduality / Return Of The Geese 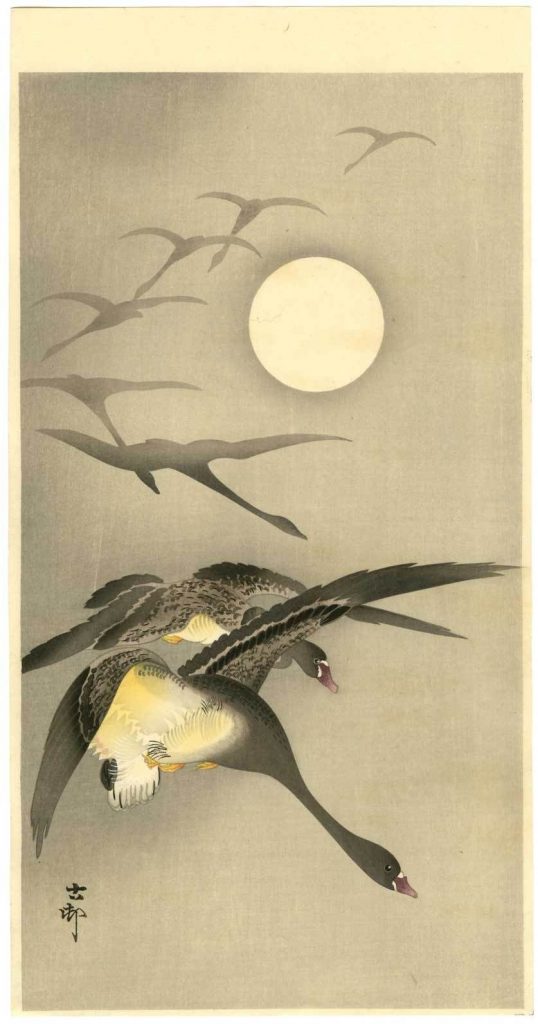 If the doors of perception were cleansed every thing would appear to man as it is: Infinite.

Returning to writing from a previous time can be an interesting exercise, and tends to clearly highlight which essays, poems, etc. have an evergreen quality—some kind of value that does not diminish with the passing of time—and which ones, not so much.

Here’s a piece that, imo, falls into the former category: worth a second (or third or fourth) read … Enjoy!

A Flock Of Geese

(1) How it is the recognition of emptiness which prevents us from misunderstanding this practice as a form of theism; and

(2) That it’s a recognition of emptiness which can purify our perception in a way that allows our current environment to arise as a Pure Land.

The Pure Lands exist as dimensions of experience which are no less (and no more) real than the samsaric dimension we currently inhabit. And we can, as a practice, train our mental patterns—the contours of our mindstream, if you will—in such a way as to increase the probability of experiencing a Pure Land, in the period following the death of the physical body.

But with a deep realization of emptiness, we don’t have to wait until the death of the body to find ourselves within a Pure Land!

Having never engaged in formal Pure Land practices, I can claim no experiential authority.  Just know that I’m now more than ever interested in the possibilities of purifying perception.

But what does it mean to “purify perception”—and in what ways is our perception currently “impure”?

If you haven’t already, or for a review, you might like to check out my essay Seeing: A Play In Three Acts, which explores perception from the perspective of western science and yoga.

Also excellent, and on a similar theme, is Tai Situ Rinpoche’s short video teaching Everything Is A Moment, which points to the fact that what we are perceiving, in any given moment—via the sensory/cognitive apparatus of our human bodymind—is, quite literally, already in the past: already gone. Why is this?

It’s because of the time-lag which is built into the “hardware,” so to speak, of the human bodymind as a recording device: By the time our bodymind processes the raw data of what is happening now in its environment—to create, say, a visual image of it—by this time the original event is already in the past.

So, in a very literal sense, what we are “seeing” (and hearing, smelling, tasting, touching) via our human bodymind is not the (presumed external) world as it exists right now but rather a movie we’ve just recently created about it.

In Posthumous Pieces, Buddhist/Taoist sage Wei Wu Wei writes of this phenomena, and suggests the following thought-experiment to help us really grok the full significance of it. The time-lag, as it actually manifests, is relatively tiny—but to help us clearly grasp its implications, let’s assume that it’s much longer: say ten minutes.

Seeing A Flock Of Geese

In this scenario, if I walked out onto my back porch at noon, and gazed in the direction of the little pond—i.e. pointed my eyes in that direction—it wouldn’t be until 12:10 pm (ten minutes later!) that the image of the pond would first appear, to be cognized by my bodymind as “actually being there.”

So the pond that I am “seeing” at 12:10 pm would be the pond not as it actually exists at 12:10 pm—but rather as it previously existed: at noon, i.e. ten minutes earlier.

What are the implications of this time-lag between an event and my perceiving of it?

If—at some time in the interim between noon and 12:10 pm—a flock of geese had landed on the previously bird-less pond, I would still perceive—at 12:10 pm—the pond as being without geese. Why? Because my image would be based upon the noon version of the pond, prior to when the geese arrived.

The Illusory Nature Of Perception

So now what? And what does this have to do with pure perception—which would seem, based only on what we’ve discussed thus far, to be a technical impossibility?

As Tai Situ Rinpoche points out, the inherently conditioned and hence “illusory” nature of perception is not necessarily a problem—if we can stay relaxed and somehow simply enjoy, without grasping, its necessary ephemerality, its dream-like or movie-like quality.

The Possibility Of Direct Perception

Does this mean, however, that “direct perception” or “perceiving nakedly”—i.e. becoming truly intimate with what is arising as self and world—is destined to remain perpetually out of reach, at best a pleasant myth? Well, not exactly …

If the bad news is that so-called “direct perception” or “pure perception” is utterly impossible—via the dualistic mechanisms of the human sensory/cognitive system—the good news is that there are other modes of perceiving, not as strictly (or at all) dependent upon the gross functioning of the human bodymind.

Which brings us back to Pure Lands. One way of understanding what a Pure Land is, is as what arises within our perceptual fields when we’ve knowingly connected with—via a “sixth sense” referred to variously as intuition or apperception—and realized our true identity as Pure Awareness, the Tao, Dharmakaya: the light/intelligence of the perfectly existent nature.

Somehow this activates what might be called nondual (and nonlocal) sensory capacities—as we learn to identify with the light flowing through the projector, more than with the film or the images thus projected.