You are here: Home / Nonduality / Sanity In A Choke-Hold? 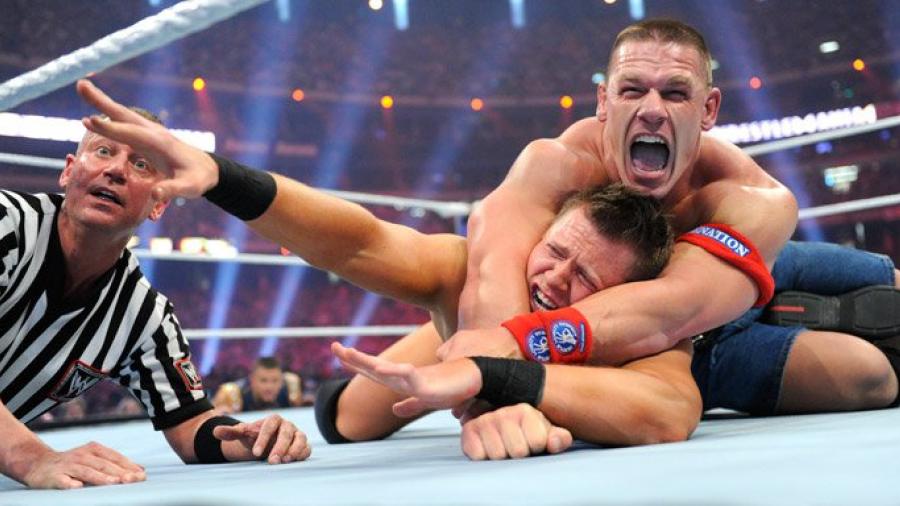 Of all the bizarre things our current POTUS is wont to do, one that has stood out to me as especially weird is the habit of assigning demeaning nicknames to his perceived adversaries.

What’s this really about?—I’ve often wondered. Some kind of infantile schoolyard bullying technique? A sign of pathological insecurity? Or the POTUS just trying to be playful?

Shedding light on this question is one of the most insightful articles I’ve read about the Trump presidency—which illustrates the ways in which WWE pro wrestling (of all things!) has provided POTUS with a modus operandi and narrative tools that he has found appealing in constructing the narrative of his own character:

When you attend one of his rallies, as I did last week in New Hampshire, it is obvious that Donald Trump has modeled his presidential persona on WWE pro wrestling.

The banter, the jokes, the trash-talking, the catchphrases, the crowd manipulation, the belligerent patriotism, the villain-slamming: It’s all straight out of a preordained WWE storyline.

And, more to the point:

It is simultaneously alarming and amusing that the Leader of the Free World is performing like a fictional bad guy, but it needs to be understood, because much of what he says and tweets is only half-serious.

That’s not because he’s channeling “Hitler, Stalin and Mao,” as a CNN guest claimed on Sunday, but because this is how he communicates the great drama of his presidency — in wrestling allegory, as a spectacle of excess.

I recommend reading the entire article, as it provides much interesting food for thought. In relation to nondual spiritual inquiry, the analysis reinforces the importance of maintaining “relative-world” standards of truth, sanity, reality.

Even if—from an Absolute point of view—all the world’s a stage, part of the play can and should include a capacity of the characters to discern truth from falsehood, sanity from insanity, and reality from delusion, within specific relative contexts.

If Donald Trump were a liberated sage, perhaps tongue-in-cheek references to WWE theatrics might, in certain contexts, be appropriate. But this doesn’t seem to be the case …

And it does seem reasonable for citizens of the United States to hold our leader to certain standards of truthful speech and decorous behavior. Yes?

But I also wonder: Is this particular politician’s theatrical behavior different in kind—or merely in degree—from that of other politicians? Or perhaps some of each—with the difference in degree becoming so extreme as to have become a difference in kind?

I mean, it would seem that “spinning the truth” in one’s favor is a tactic that’s pretty standard among politicians of all stripes. So when does shading the truth slide into obscuring or violating it completely?

While this is a question that perhaps can never be answered in the abstract, when it actually happens most of us can feel it (or so says the optimist in me).

Vast As The Sky, Fine As A Grain Of Barley Flour

As the Tibetan Buddhist yogi-saint Padmasambhava has reported:

My view is as vast as the sky, but my attention to the law of cause and effect is as fine as a grain of barley flour.

The “view” that Padmasambhava is referencing (as being “vast as the sky”) is absolute nondual reality: infinite, eternal, indestructible. From this point of view, there are no problems. From this point of view, all phenomena (including politicians!) arise and dissolve with the “one taste” of primordial purity. All of life’s a dream, a theatrical play, an ephemeral rainbow, a kaleidoscopic dance of shape and color.

But then there’s also Padmasambhava’s “attention to the law of cause and effect.” This is a reference to how things work within specific space-time contexts. From relative points of view, it matters how we think and act and speak. From relative points of view, we can designate and then recognize the difference between truth and falsity, reality and delusion, samsara and nirvana.

Wonders Of The Natural Mind

The following chart—reproduced (in two parts) from Tenzin Wangyal Rinpoche’s book, Wonders of the Natural Mind—describes three levels of insight, and the practices most appropriate to them.

I’m not crazy about the “superior-average-inferior” language as a classification system. To me, beginner-intermediate-advanced is a bit more friendly, and more accurately conveys the fact that there’s nothing wrong with being a beginner.

When someone is learning mathematics, the first step is to learn how to count, and basic algebraic operations such as addition, subtraction, multiplication and division. Once we’ve become sufficiently adept at algebra, we can move on to geometry, and then calculus. Just because algebra is less advanced than calculus doesn’t make it inherently inferior—since without algebra, calculus would not be possible.

And so it is with the various stages of spiritual liberation. From the endpoint, we can see that what came before was not technically necessary—yet in many cases is a practical necessity. The key point is to recognize where we are, and apply the view and way of liberation appropriate to our situation.

Which is just to say, that there are applications of the All the world’s a stage view that are enlightened; and applications of a seemingly identical point of view that remain mired in dualistic ignorance. And my suspicion is that what we’re witnessing with our POTUS is the latter.