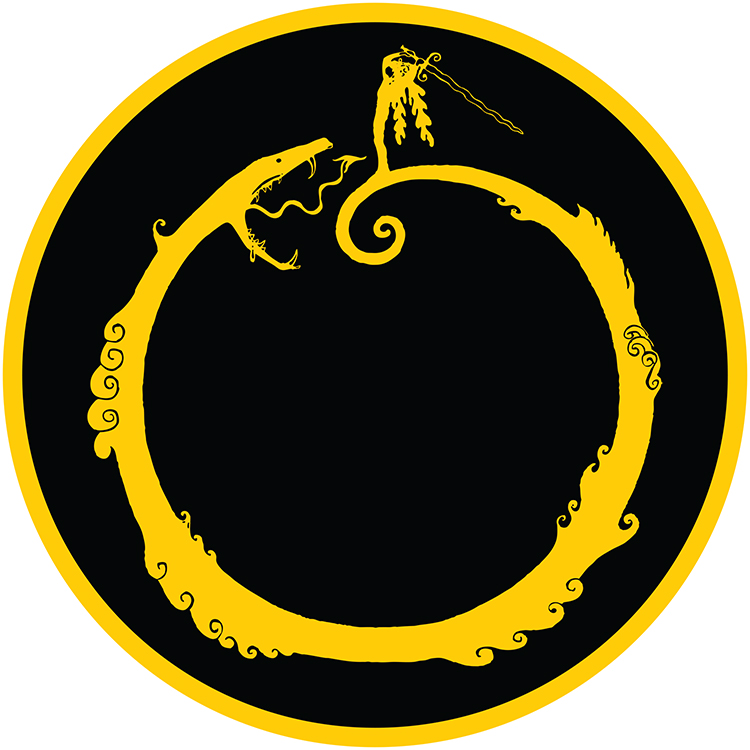 The central visual image representing the art & science of Alchemy is the Ouroboros: a dragon or snake swallowing its own tail. This symbol deftly reflects the totality of the alchemical process: the great circulation of Nature, by which, as described by the hermetic alchemist Peter Murien:

what was above as the very subtle spirit descends and becomes … the below, the earthy and fixed; then by reversing the process, what is below – fixed, heavy & earthy – ascends and gradually becomes volatile and subtle as the above.

Hence, the circle is closed: the snake/dragon has indeed swallowed its tail.

The Greek philosopher Homer referred to this process as the “golden chain.” What is represented, along with the individual internal process of the yogi or yogini, is also the chain of alchemical adepts (those able to link Heaven and Earth), beginning – in the classical Alchemy lineage – with the Egyptian Hermes Trismegistus, who wrote:

This same process – the descent of consciousness into matter, and the subsequent ascent of matter back into its more rarefied state (and, in nondual traditions, the linking of these two processes in a continuous loop) – is described in various other mystical traditions: most notably in Taoist Inner Alchemy texts, but also in, for instance, Patanjali’s Yoga Sutras.

In the language of Topology – the branch of mathematics that looks at what happens when certain geometric figures are stretched, twisted & folded (or, more precisely, when the space around these figures is distorted in these ways) – the Ouroboros is what’s called a knot: a closed curve in three-dimensional space.

A salient characteristic of knots is that they can indeed be stretched, twisted & folded into all sorts of superficially different shapes, while retaining, mathematically, their sameness. The central question explored within Topology is how to know when one shape is simply a distorted version of another? The short answer is that this depends upon identifying what are called invariants: characteristics that remain, across variations in a given shape/knot.

Topology has recently been employed in the service of the newly-emerging science of quantum computing, as a resource for addressing the problem of decoherence. In quantum computers (which are at this point mostly still theoretical), information is stored on sub-atomic particles. The major problem with these so-called “qubits” is their susceptibility to decoherence: disturbance of their quantum space/structure by the Newtonian environment. Each time such a disturbance happens, and the quantum state of the particles is affected, the information stored on them is lost or distorted.

This is where Topology, potentially, is able to come to the rescue. For information stored on topological structures is impervious to local error, since small pieces of lost information can easily be reconstructed, given what is known of the overall pattern/shape of which it was a part. (Imagine a donut, and a small piece on the surface of the donut being lost … Since we can still see what the overall shape of the donut is, we can easily replace that missing link.) So what is needed then, in terms of quantum computing, are sub-atomic particles which can be mapped topologically.

And it just so happens … that when an electron liquid on a two-dimensional crystalline surface is subjected to extremely cold temperatures and a strong magnetic force, sub-atomic particles called anyons are created. These anyons move about the surface – they “dance” – in patterns which physicists call braids, and which can be mapped topologically. As a result, these anyon braids (defining what’s called a Quantum Hall fluid) are very good candidates for storing information in a quantum computer, in a way which side-steps the problem of decoherence.

Another interesting thing about anyons is that they carry a fractional charge. Whereas protons carry a single positive charge, and neutrons a single negative charge, anyons carry charges corresponding to any real number. Different fractional states, i.e. charges, define different “flavors” of Quantum Hall fluid, and determine how complex a computation is possible, using that fluid as a carrier of information in a quantum computer.

Assuming this all works out, and we’re able to use these anyon braids to store information: What would be the advantage of such a topological quantum computer? For one thing – speed. A classical/Newtonian computer operates via bits (housed in circuits or silicon chips) that are either on or off. In line with the so-called weirdness of the quantum world, qubits (say, in the form of anyon braids housed in Quantum Hall fluid) exist in combinations of on and off, simultaneously — a phenomenon known as the superposition of states.

This property allows a quantum computer to perform multiple computations, and get multiple answers, all at the same time. So a calculation that might take a classical computer millions or billions of years to complete, would be completed via a quantum computer in a matter of minutes!

Nature As Our Computer?

A second advantage of such a computer is, perhaps, more aesthetic (or spiritual/philosophical) than practical. There’s a sense in which – by employing sub-atomic particles as our hardware (and software, simultaneously) – we’re using nature as our computer!

The movement of the anyons has an intelligence of its own, similar to the “intelligence” we observe when, say, we throw a ball up in the air, and watch it fall to the ground: The physics of its motion is calculated by the medium (air, gravity, etc.) through which it travels. It doesn’t require us to transmit the appropriate mathematical formulas to it, in order to continue along its trajectory!

So how is the creation of a topological quantum computer – the projection by our collective human consciousness of a radically different model of computing/information processing – related to Alchemy & the Ouroboros (where we began this essay)? Or, to expand the context even more, how is it related to the Alchemies of Taoist, Buddhist, and Hindu Yogas?

There are a number of contemporary Taoist as well as Buddhist teachers who use the metaphor of a computer to describe the working of the human bodymind. Which, at this point, then begs the question: How might we, as Taoist, Buddhist or Hindu yogis and yoginis, transform ourselves – in particular the way that we process information, i.e. relate with the intelligence/energy of the manifest world – from something like Newtonian/classical computers, to something like topological quantum computers?

Such a change will require, as we’ve seen above, a change not only in our software (our mental/emotional “programming”) but also, and perhaps more fundamentally, in our hardware (our brain & physical nervous system) – and/or in the relationship between the hardware & the software. How might I evolve from being a Newtonian “machine” that relates to my world in terms of a series of yes’s and no’s (0’s and 1’s) to a Being defined by fractional charges, by superpositions, by the capacity to perform multiple simultaneous calculations: to hold, simultaneously, multiple points of view?

The Wisdom Of Closed Loops & Patterns

Perhaps a part of the answer lies – as it does within the realm of quantum computing – in finding an information storage & processing medium (a bodymind!) which operates via physical/energetic patterns more than via individual bits of information – so that a stretching, bending or twisting (a so-called “distortion”) of the medium will not sacrifice its integrity. So that small losses of information, small fluctuations in the immediate environment, can easily be compensated for by the wisdom & stability of the larger pattern.

What might this mean in terms of a physical practice such as yoga or qigong? And could this be part of what is being transmitted to us via the alchemical symbol of the Ouroboros? – That the creation (or recognition) of patterns, and more specifically, closed loops, of so-called opposites finding their unity, recognizing themselves to be two ends of the same stick … is an important key to the whole alchemical process, to spiritual as well as technological awakening?

The Entire Universe Within Our Human Body

Taoist Inner Alchemy – as well as Kashmir Shaivism and other mystical traditions – remind us, again and again, that the entire universe exists within and as our human bodies. The stars & all the galaxies are alive within the very structure of our cells. (According to which the Theory of Relativity should be able – yes? – to swallow the tail of Quantum Mechanics, but alas …)

And perhaps what’s being pointed to also is the obvious fact that we are indeed – in our manifestations within the phenomenal world – part of nature: partaking of the wisdom, love & limitations of the plant, mineral & animal kingdoms … And it is in this association – rather than the escape from it, into, say, the world of machines, of artificial intelligence – that lies our greatest freedom and power.

Which of course is what those playfully-profound, wise and silly Taoists have been saying all along!